This map shows the overlapping habitats of Llamas, Alpacas, Guanacos and Vicuñas in South America. The ring around the images has the colors of the different areas, each species occupies. Due to range overlapping, a single species might have more than one color. Each image is a button that you can select to pick the distribution of a particular species. Hover to get the name of the ecoregion. For more information scroll down.

Camelids are large herbivorous animals with slender necks and long legs. They don't have hooves but two toed feet. The South American Camelids (SAC) are also known as Lamoids or New World Camelids. They are adapted to steep and rocky environments. SAC are divided in four groups: Llamas, Guanacos, Vicuñas (Vicuna) and Alpacas. Llamas are the domestic form of Guanacos. Alpacas are the domestic form of Vicuñas. Lamoids are able to interbreed and to produce fertile offspring. The chart above displays the geography of SAC species in South America. 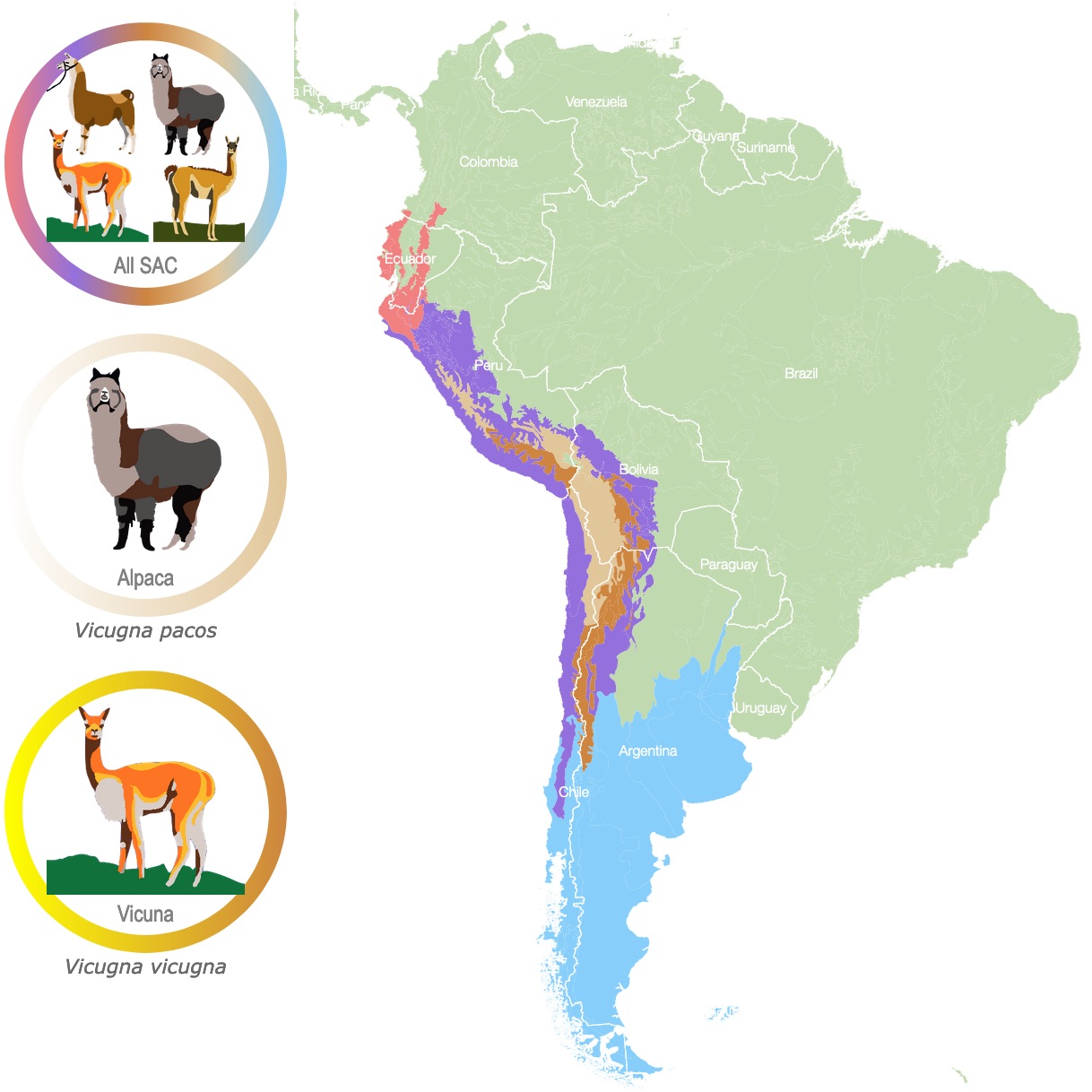 The native habitat of the llama is throughout the Andes mountains, but they are not found in the wild. The natural range of the Llama is the Andes highlands, specifically the Altiplano of southeast Peru and western Bolivia Desert USA. Llamas are hardy and well suited to harsh environments. They are sure footed, to easily navigate rocky terrain at high altitudes.

Llamas are hardy and well suited to harsh environments. They are quite sure-footed, easily navigating rocky terrain at high altitudes.

They can grow as much as 6 feet tall though the average llama between 5 feet 6 inches and 5 feet 9 inches tall.

Llamas weigh between 280 and 450 pounds and can carry 25 to 30 percent of their body weight. Llamas know their own limits. If you try to overload a llama with too much weight, the llama is likely to lie down or simply refuse to move.

The Llama is a gentle animal, but when mishandled or harmed, it will lie down, hiss, spit, kick, and refuse to move.

Llamas are vegetarians and have very efficient digestive systems.

Llamas are social animals and prefer to live with other llamas or herd animals.

They are domestic animals, not known to exist in the wild state. They appear to have been bred from guanacos, during or before the Inca civilization, around 4500 B.C. Source: Encyclopedia Britannica.

Llama wool is light, warm, and water-repellent. The soft, undercoat is used for garments and handicrafts while the coarse, outer coat is frequently used for rugs and ropes Llama Facts.

Because of their gentle and docile behavior llamas are common in petting zoos, and even work as therapy animals! 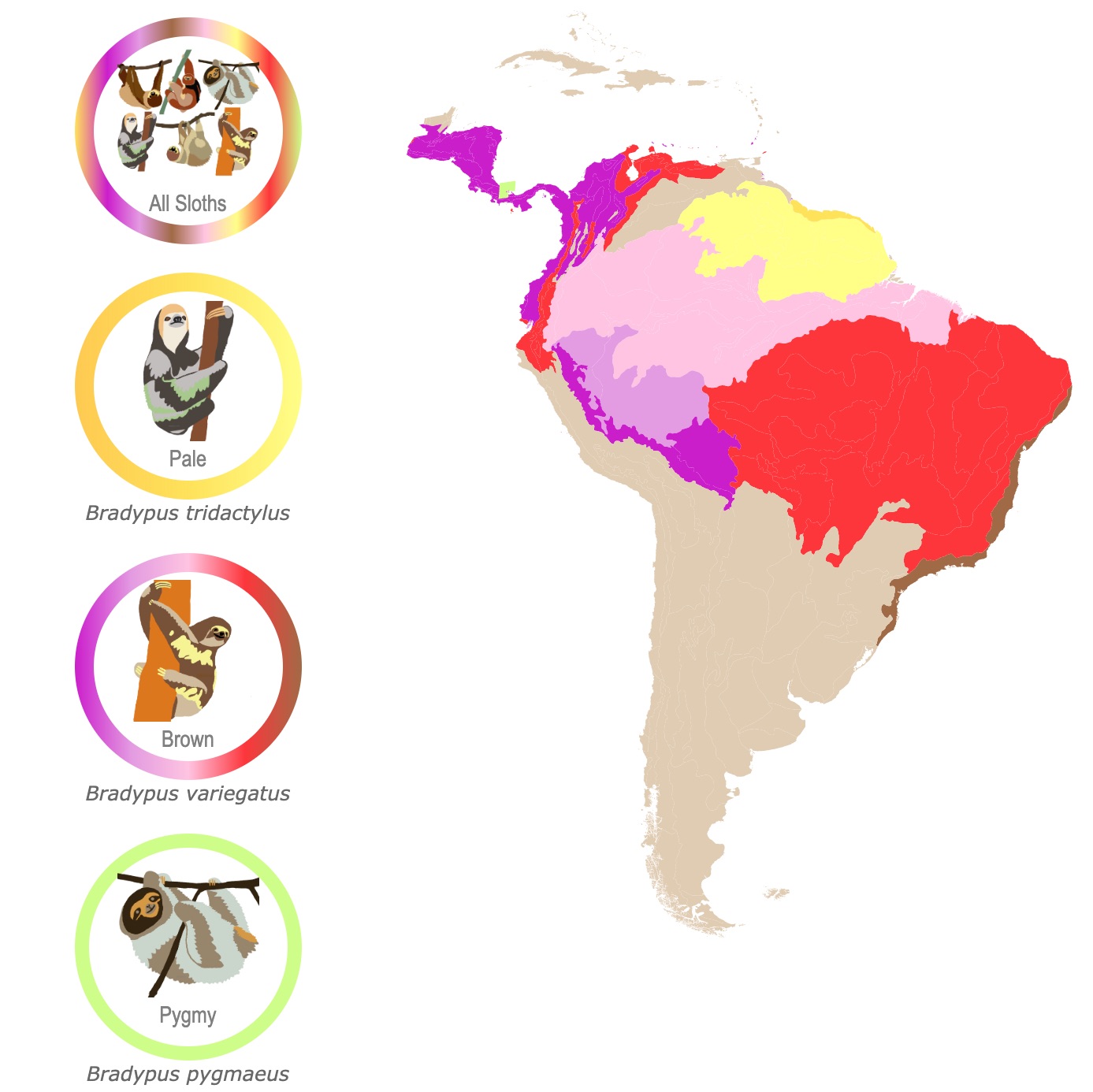 Interested in Animal Habitats? Check Sloth Habitat Map you will find there is more than one species throughout South America!

Guanacos are the mostly widely distributed of the four species of South American Camelids. They occupy the most diverse range of habitats, including harsh, highly seasonal environments.

They are able to cope with contrasting climates as those of the arid Atacama Desert in northern Chile and the wet Tierra del Fuego at the southern tip of South America. They are found in: desert and xeric shrublands, montane and lowland grasslands, savannas and shrublands, and wet temperate forests.

Guanacos have a fairly flexible social system, and populations may be sedentary or migratory depending on the year-round availability of forage.

Guanacos are herbivorous. As browser-grazers, they are able to exploit a diverse range of food sources Animal Diversity.

The primary predators of guanacos are pumas, which coexist with guanacos throughout their distribution.

Guanacos live on land high in the Andes mountains. Up to 13,000 feet (3,962 meters) above sea level, as well as on the lower plateaus, plains, and coastlines of Peru, Chile, and Argentina.

Guanacos were once over hunted for their thick, warm wool. Now they thrive in areas protected by law.

Bears have adapted to a wide set of habitats. You can see them here!

The native distribution of Alpacas include the central and southern Andes from Peru to Argentina at elevations of up to 15748ft (4800m). Remains of alpaca found at elevations closer to sea levels suggest that alpaca once had a wider geographical distribution. This reduction probably occurred with the arrival of Spanish settlers and their livestock.

Alpacas live in the Andean Altiplano, or the Andean high plateau, preferably near wet areas. The climate of the Altiplano is harsh, reaching temperatures of below 32°F (0°C) during the night and 60°F (16°C) during the day. Annual precipitation ranges from 1.3ft to 2.2ft (400mm to 700mm) Animal Diversity.

Alpacas are a strict grazer.

There are two breeds of Lama pacos: Huacaya and Suri. Huacaya are the most abundant.

The longevity of Alpacas in the wild is 5 to 10 years, whereas in captivity it is approximately 20 years.

They are social animals that live in herds. These animals are sheered to provide fibers for fleece, clothing, and can be eaten.

The alpaca is the foremost wool fiber producing animal in the Antiplano region. Source: Alpaca study. The coat is clipped once a year and the fiber has been described as the finest. The fiber is soft and can absorb up to 15% of ambient humidity without altering it. Additionally, the fiber is warmer and stronger than wool. 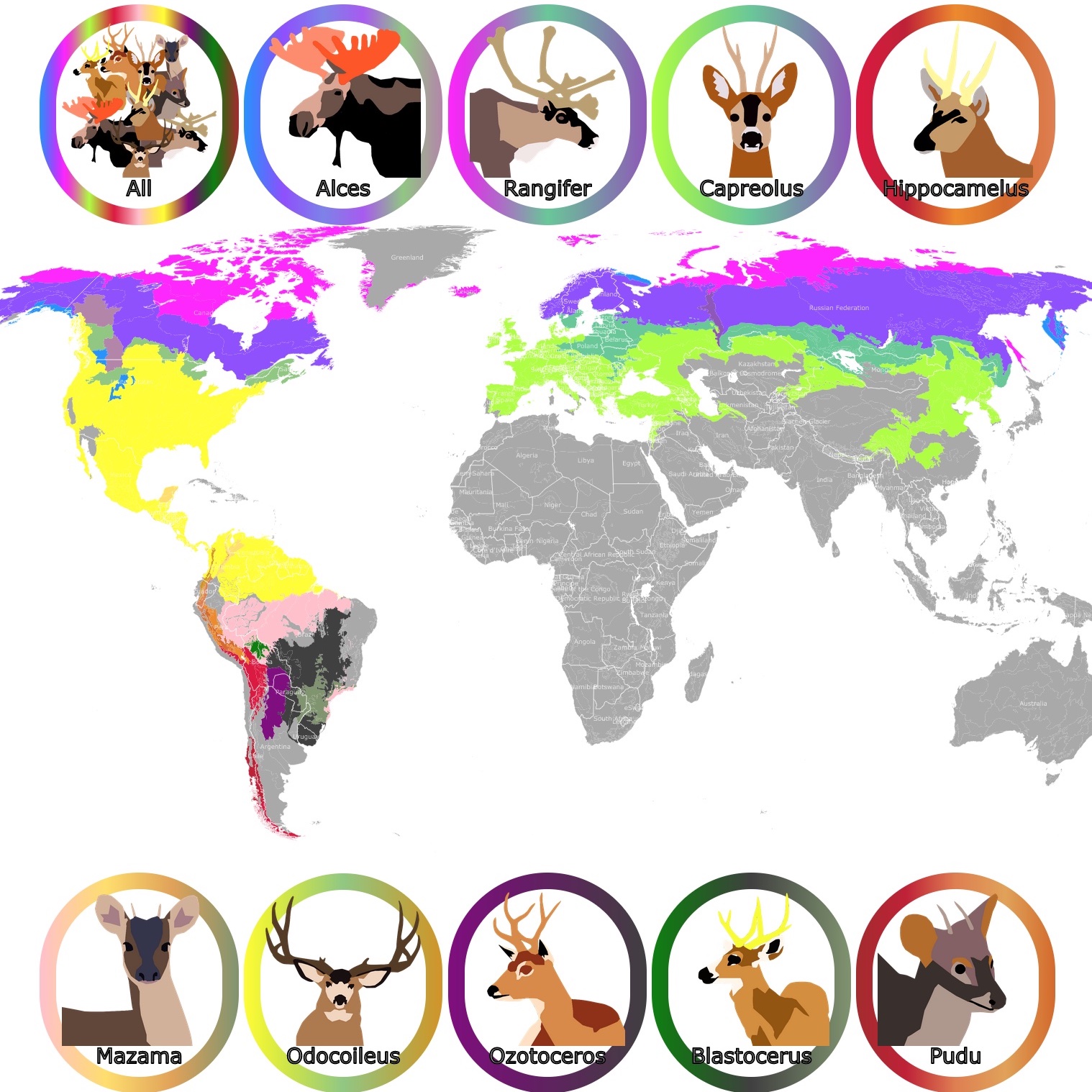 Another group of organisms live close to llamas, and alpacas. To learn more, visit this map of New World Deer

Vicunas are found in semiarid grasslands and plains at altitudes of 11,482-18,864 ft (3,500-5,750 meters). These lands are covered with short and tough vegetation. Due to their daily water demands, vicunas live in areas where water is readily accessible. Climate in the habitat is usually dry and cold. Animal Diversity.

Vicunas are the smallest members of the family of camelids. Its chest is covered with a silky white mane, but the fur of the rest of its body is soft and of the same length.

A slender body and relatively long neck and limbs give a vicuna an elegant appearance.

In the past, vicunas were an important source of wool and meat. At the time of the Incas, vicunas were captured, shorn and released into the wild again.

Due to poaching, the vicuña’s coat and products are smuggled in large amounts to Asia and Europe. Habitat loss due to over-grazing from domestic livestock or human activities, such pollution of water sources and mining, is a threat to their habitat. Climate change may damage the delicate ecosystem where the vicuña lives.

A recent potential threat, in the Andes as well as worldwide, is the breeding of a vicuña and alpaca hybrid (a pacovicuña) for commercial purposes. The vicuñas rarity and the difficulties inherent in harvesting the skittish animal's coat have made it the most expensive wool in the world. The Inca valued vicuñas highly for their wool, and it was against the law for anyone but royalty to wear vicuña garments. Source: http://animalia.bio/vicuna.

All South American camelids can crossbreed and produce fertile offspring. However, crosses between domestic and wild South American camelids, do not normally occur in nature. The product of crossing a llama and an alpaca is a Huarizo, which shows intermediate physical characteristics. The product of crossing a vicugna and an alpaca is a Pacovicuna, which shows resemblance to the vicugna. The latter has received considerable attention due to the high quality of the fiber that it produces.

Many of these camelids live in mountains created by volcanoes. To learn more about them, click on this map about World Volcanoes.

It is easy to confuse these adorable camelids. Specially the two most common ones, Llamas and Alpacas.

So what is the difference between Llamas and Alpacas? Here is a list of differences between them. Data from @Peppermintnarwhal.

Inspiration to Make a Llama Map

This map was inspired by the two llamas that roamed around my primary school in Bogota. I never knew why our school principal decided to keep them, but I do remember my mother informing me llamas would spit. I made sure I would not bother them or get too close to them. Lately they seem adorable and seem to be everywhere. I just could not avoid the fad, or maybe because they are no drama llamas!