Map of Waterfalls in the U.S.

This interactive map shows the Locations, Names, and Elevations of Waterfalls in the US. The color of each circle shows the elevation of each waterfall. For more detail, zoom in. To see Alaska and Hawaii zoom out. For more data hover over the map. For more information scroll down.

A waterfall is usually a geological formation resulting from water, in the form of a stream flowing over a rock, establishing a vertical fall of some magnitude. Sometimes a plunge pool may be formed as a result of the waterfall.

Waterfalls also occur where meltwater falls over the edge of an iceberg or an ice shelf.

A Cataract also describes of Waterfall. A cascade describes a fall of only a few feet. Source: Sciendo

How are Waterfalls Formed

Eventually the soft rock is eroded by the water resulting in the watercourse getting steeper beyond the hard rock layer.

The steepness of the fall also accelerates the erosion, as gravity increases the speed of water accelerates and so does the force on the soft layer.

Over time the watercourse slope increases, until there is a vertical fall, at this point the waterfall is formed!

As the watercourse keeps cutting into the softer rock, the water lands on a pool that keeps getting deeper.

After a long while it is possible for the water resistant rock to give in to the erosion and collapse into the base of the waterfall. An example of this is the Niagara Falls that continue to retreat at a rate of 3ft per year. Source: WorldofWaterfalls.com

Where are Waterfalls Found

This is expected in areas like deserts, and semiarid areas which don't have enough water to create one. Polar regions and low lying plateaus are also not favorable places for their formation.

Most waterfalls are in montanous areas. To learn more check this map that shows hills, mountains, and mounts in the US.

Waterfalls come in all shapes, sizes, and forms. There is no standard way to classify waterfalls. Some are based on volume, others on width, others by height.

Nevertheless there is a classification that tries to describe them as a whole:

Interested in geology? Check this map of World Volcanoes

Must See Waterfalls in the U.S.

This is a group of three waterfalls, located on the Niagara River, between New York and South Eastern Ontario Canada. The combined falls have the highest rate of any waterfall in North America. It is well known by its beauty, power, and size.

The falls are of glacial origin and at their highest point they have a higtht of 167 feet (51 m).

The water flow is halved during the night and low tourist seasons, in part to control the hydroelectric power. The peak tourist season is summer. During this time of year, the falls are illuminated from sunset until midnight!

One of the magnets of this location is the possibility of watching the falls from different angles, even up close from a boat! But besides the falls there other attractions that will make your visit worthwhile.

Want to learn about other geologic features in the US? Check this map about Caves!

Located in Yosemite National park in California. These falls are of glacial origin and its rocks are mainly made of Granite.

The peak flow is in early summer, as snowmelt cascades down to the Valley floor. During late summer to early fall the falls dry completely.

The falls have different trails and road access to view them from different angles and appreciate their beauty.

Bridalveil is also located in Yosemite National Park California. This waterfall is in one of the most beautiful valleys, Yosemite Valley. Bridalveil is in front of El Capitan, an imposing 3,000 feet (914m) granite wall.

Bridalveil with a height of 620 feet (189m), was made famous by Ansel Adams in one of his many photographs of the Park.

The best time to visit is in early spring, but a small rainfall brings the flows back to the waterfall in other seasons.

With a strong wind, the falling water is often blown sideways, and when the flow is light, it may not reach the ground directly below. Source: WorldofWaterfalls.com

Many of these hot springs are located in Deserts. To learn more about them check this map of US Deserts.

This beautiful fall is 265 feet tall and is in Wyoming, at Yellowstone National Park.

The first thing that strikes you is its particular shape. It looks like a circus big top.

To see this waterfalls you need to walk 16 miles round trip and cross a river. Nevertheless, it is a popular trail because it provides access to abundant berry patches, fishing opportunities, and colorful fall foliage.

Located in Oregon's Columbia Gorge Natural Scenic Area. The gorge itself has multiple falls worth visiting, but Multnomah is the most popular water fall.

In fact, Multnomah Falls is the most visited natural recreation site in the Pacific Northwest with more than 2 million visitors each year! Source:fs.usda.gov

The fall is 620 feet high, but for a closer view, it is possible to walk several hundred feet up the paved trail to reach Benson Bridge, which spans the falls. From the bridge you have perfect views of the top tier and the bottom one.

The fall is fed by underground springs and does not dry up in late summer like other falls.

Ruby Falls is close to Chattanooga Tennessee. Located in the Lookout mountains, this waterfall is inside a cave!

This is the highest cave waterfall in the United States. It has a 145 foot (44 m) height over the plunge. To see it, you can descend 26 stories by elevator and explore the scenic cavern path.

Ruby Falls Cave has many of the well-known types of cave formations like stalactites and stalagmites, columns, drapery, and flowstone.

Akaka Falls State Park is in Hilo, Hawaii. The falls are 420 feet high and flow year round.

To access the falls you can walk half a mile on a paved road. Unlike most waterfalls in the U.S., these falls are surrounded by the lush tropical forests of Hawaii.

The path to the falls has multiple platforms to view them at different points.

If you join a tour it is possible to see more than one waterfall in a day. 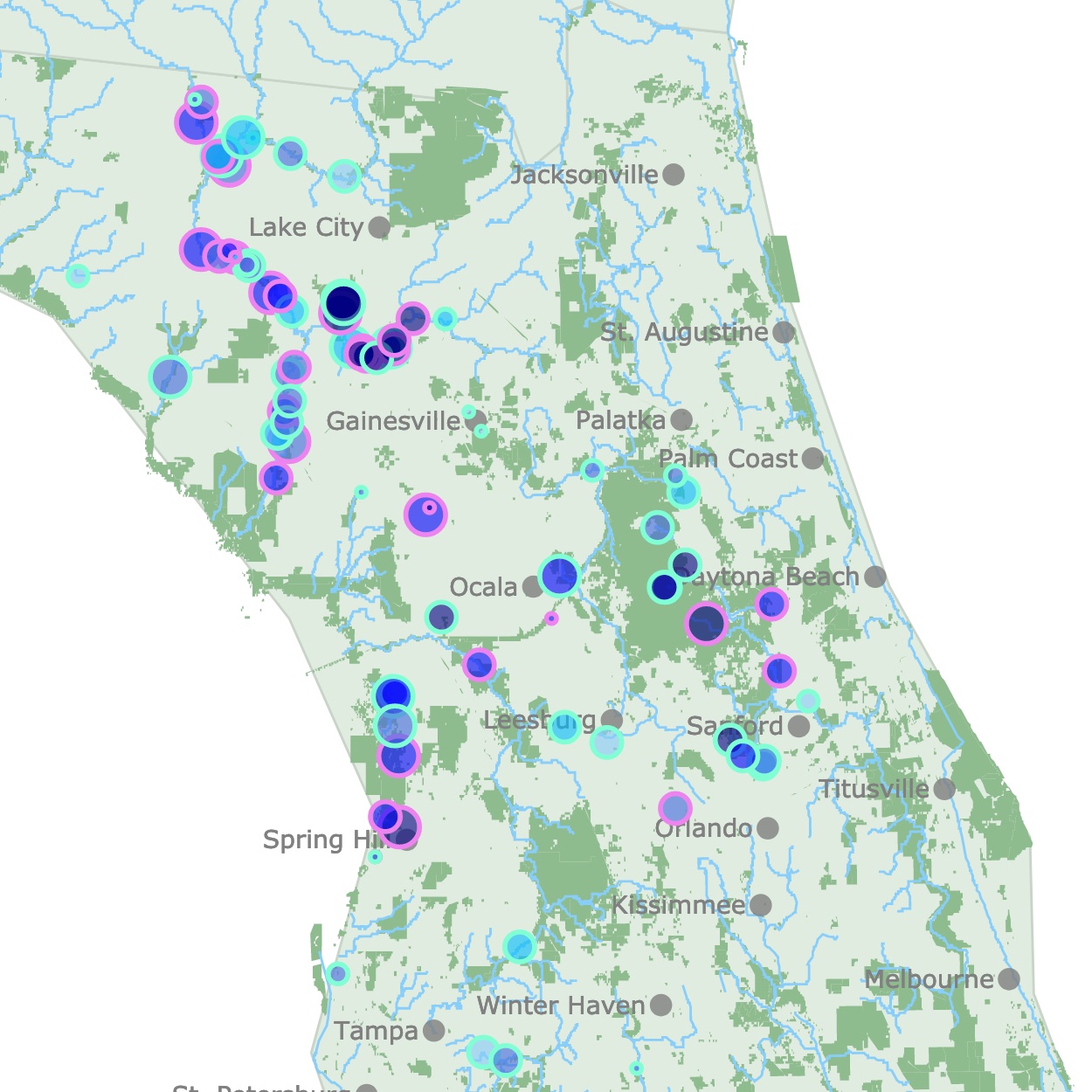 Situated in Sapphire, North Carolina, these falls are 811 feet tall. The upper section or tier falls 411 ft. This is the tallest waterfall in the Eastern United States.

You can access the upper section through a paved path of a 1/4 mile. To see it from the bottom you have to walk over wooden steps. The bottom access is through South Carolina.

The falls have a high volume of visitors in the afternoon, so to avoid crowds is better to visit in the morning. Source: fs.usda.gov

Best Waterfalls to Swim in the U.S.

Fortunately there are falls that are not just for viewing but for swimming. Here are the best to go and take plunge.

Both falls are in Havasupai Private owned land in Arizona. Not far from each other, the access to the falls is a 10 mile route on foot or horseback. No paved roads in the arid trails.

The natural beauty of the desert, and the contrast of the reddish rocks surrounding it, with the incredible blues of the water make it a feast for the eyes.

The attraction is not just the beautiful sight but the cool, blue swimming hole for visitors to plunge in. Campsites are available for those who wish to spend more than one day in the area. 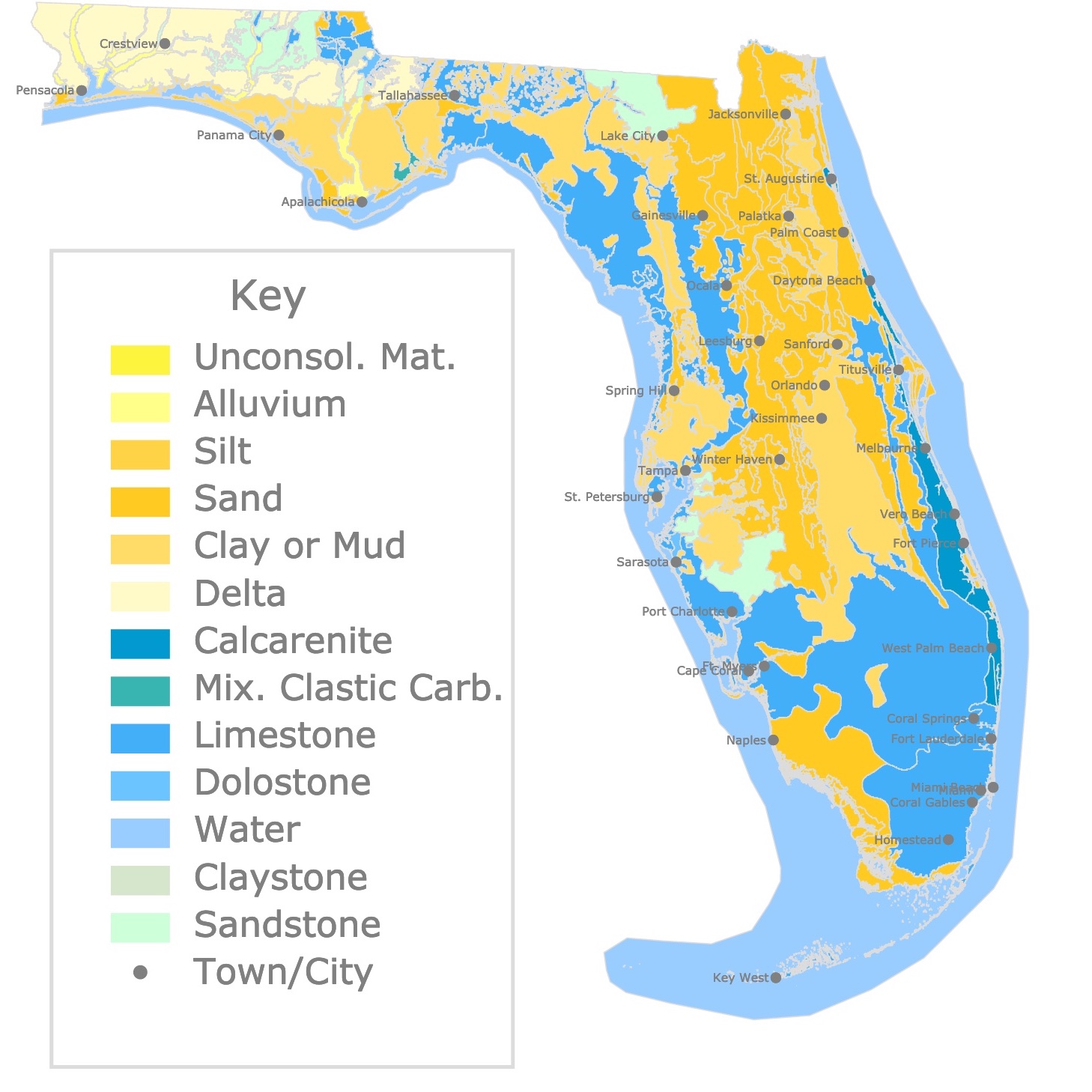 Interested in Geology but the Karst type? Check this map of Florida's Geological Features.

The gorge and waterfall are not easily accessed and can only be reached by foot. It is about 1.5 miles of hiking on steep and rugged terrain. Nevertheless, part of the fun is the beautiful hike.

These falls are not just about the swim, but getting water springling all over your body! It is possible to climb different tiers of the waterfalls!

Located in the Big Island of Hawaii, these falls are close to another beautiful waterfall, Rainbow Falls.

Pe'epe'e falls are visible from the road. The waterfall reaches a height of 100ft and the plunge pools are surrounded by lava rocks from the eruptions of the Mauna Loa.

This is an idyllic location where the water from the falls continues into Boling Pots. They are called this way because when there is enough water they look like they are boiling.

Reaching both locations and swimming is allowed but when there is heavy rainfall it is better not swim. There are flash floodings that have resulted in loss of life.

Alamere Falls is in Phillip Burton Wilderness. Reaching the falls is at least a 13 mile (20km) walk. However, the path is accessible year round and is a popular trail for bird watchers, and nature lovers.

The falls are a spectacular sight as water cascades over a 40 foot tall (12 m) cliff onto the south end of Wildcat Beach. This means the falls flow directly into the ocean!

The falls are an incredible sight as you can see the waterfall, the cliffs, and the Pacific Ocean.

Jump Creek Falls is in Owyhee County, Idaho. The trail that leads to the falls is only 1/4 mile long.

The falls are 60 feet tall, but the greatest part is not the views of the fall at the canyon, it is swimming in the pool below the falls.

Because this area is not just about the falls, take your time to admire the cliffs in the canyon that can reach up to a 600 feet. Source: Rootsrated.com

Hooker falls are located in Ashville North Carolina. This is the fourth waterfall on the Little River in DuPont State Forest, and you can hike to the other three.

The falls are only a 12ft high, but its wide drop into the pool creates a beautiful view, and a great place for splashing around on hot summer days.

The trails are about 1/4 mile and one is paved for wheelchair access. This is a perfect pool for families with children, as the falls generate very little current.

These are my favorite products found on Amazon when hiking of visiting Amrerica's Waterfalls.

The shapefiles for the states were downloaded from Natural Earth.

The data was downloaded from the Geographic Names Information System (GNIS), maintained by USGS. Data cleaning was done with R Project for Statistical Computing.

This map will be updated with new data! To receive updates on this and more nature maps join my email newsletter!!!!!!!