Bayous and Swamps: Where are they Commonly Found?

This is an interactive map of wetlands from the United States. It shows the locations of water bodies named Bayou, Swamp, Bog, Marsh, Slough, and Coulee. For names and types, hover over the map. Zoom out to see Alaska and Hawaii. Zoom in to see all wetlands in detail.

Wetlands are seen as wet, dirty, and undesirable places. They were disregarded to the point that the experssion "drain the swamp" came to be.

Fortunately, we now understand that they are beautiful, complex, and vital ecosystems. According to WWF, wetlands are some of the most productive habitats on the planet.

Wetlands are areas covered by the water near the soil. The water cover is throughout the year or during the growing season.

Wetlands support high concentrations of animals, including mammals, birds, fish, and invertebrates. They serve as nurseries for many of these organisms.

Wetlands directly affect the health and wealth of humans by supporting a place to cultivate rice. A staple in the diet of half the world’s population.

They also provide a range of ecosystem services that benefit humanity, including water filtration, storm protection, flood control, and recreation.

More recently, wetlands are recognized as Carbon sinks and used as tourist destinations!

Do you like Name maps like this one? Check this Lake and Ponds map of the U.S.

As already mentioned, wetlands are essential habitats for different organisms. These vary greatly depending on location.

Other vertebrates include alligators, turtles, snakes, salamanders, newts, and frogs.

There are many birds like storks, herons, grouse, plover, and waterfowl.

Many wetlands are mainly preserved for the migratory birds that visit them. For example, Canada geese, peregrine falcons, and whooping cranes.

Fish like the sea trout and the striped bass use wetlands as a nursery.

The definition of Bayous from the National Geographic Encyclopedia states "A bayou is a slow-moving creek or a swampy section of a river or a lake. They are usually found in flat areas where water collects in pools.

Bayous are often associated with the southeastern part of the United States. They are mainly found in the South of the United States, to be more specific, close to the Gulf Coast, in states like Texas, Louisiana, Mississippi, Alabama, Florida, and Arkansas.

Bayous are usually shallow and sometimes heavily wooded. They can be freshwater, saltwater, or a combination of both."

I thought Bayou was a French/Creole term. But it "originated from the Choctaw word “bayok”, which refers to a small stream. The current spelling of the word comes from the Louisiana French variation of the word “bayouque” see Facts about Louisiana Bayous.

To learn more about bodies of water, check this interactive map of U.S. Rivers and streams.

Bogs are mossy wetlands. Most of their water comes from rain and snow. Water in bogs is low in oxygen, very acidic, and often cold.

Bogs are mainly found close to the North East Coast of the U.S., in Maine and other New England states.

"Marshes are produced by flooding and have distinctive soils, microorganisms, plants, and animals. The soils are usually anoxic or hypoxic, allowing vast numbers of microorganisms, particularly bacteria, to transform elements including nitrogen, phosphorus, and sulfur among different chemical states. Marshes are some of the most biologically productive habitats in the world, and therefore support large numbers of animals, from shrimps and fish through to birds and mammals." From: Science Direct.

A swamp is an area of land permanently saturated, or filled, with water. Many swamps are even covered by water.

There are two main types of swamps: freshwater swamps and saltwater swamps.

Swamps are dominated by trees. They are often named for the type of trees that grow in them, such as cypress swamps or hardwood swamps.

Swamps exist in many kinds of climates and on every continent except Antarctica. From: National Geographic.

It is easy to confuse Bayous vs. Swamps. Swamp is a wetland with trees. Bayous are bodies of water mainly close to the Gulf Coast.

If you liked this map focused on Swamps and Bayous, you will probably like this research about Louisiana's names and their history. This book is found on Amazon as Louisiana Place Names: Popular, Unusual, and Forgotten Stories of Towns, Cities, Plantations, Bayous, and Even Some Cemeteries.

A slough is typically used to describe wetlands. Sloughs along the edges of rivers form where the old channel of the river once flowed.

These areas are also referred to as oxbows because they tend to form at a bend in the old river bed, making them look like the U-shaped collar placed around the neck of an ox to which a plow is attached.

Along the West Coast, sloughs are often named for the quiet, backwater parts of bays. Therefore, they are part of the estuary, where freshwater flows from creeks and runoff from land mix with salty ocean water transported by the tides. Source: NOAA.

Coulees are geographical features common in southwestern parts of Canada and Northwestern regions of the United States.

The word coulee is from the French-Canadian word coulee, which is a derivative of the French word couler which means ‘to flow.’ The name of these forms is, therefore, an indication of how they are shaped.

Coulees are usually gullies or ravines. Nevertheless, dry ones, were shaped by the action of moving water. They are the products of intense erosion by water.

The definitions of coulees vary depending on location. In the Great Plains, a coulee is used interchangeably to refer to any water features ranging from ponds to creeks.

In southern Louisiana, a coulee is a dry ravine or gully that becomes larger due to rainy weather.

Coulees have also been used to refer to small ditches and canals in swamps and perennial streams.

Depending on the definition, these forms may be distinguished by steep slopes due to the erosive action of water. Most coulees today occupy past river beds." Source: World Atlas. 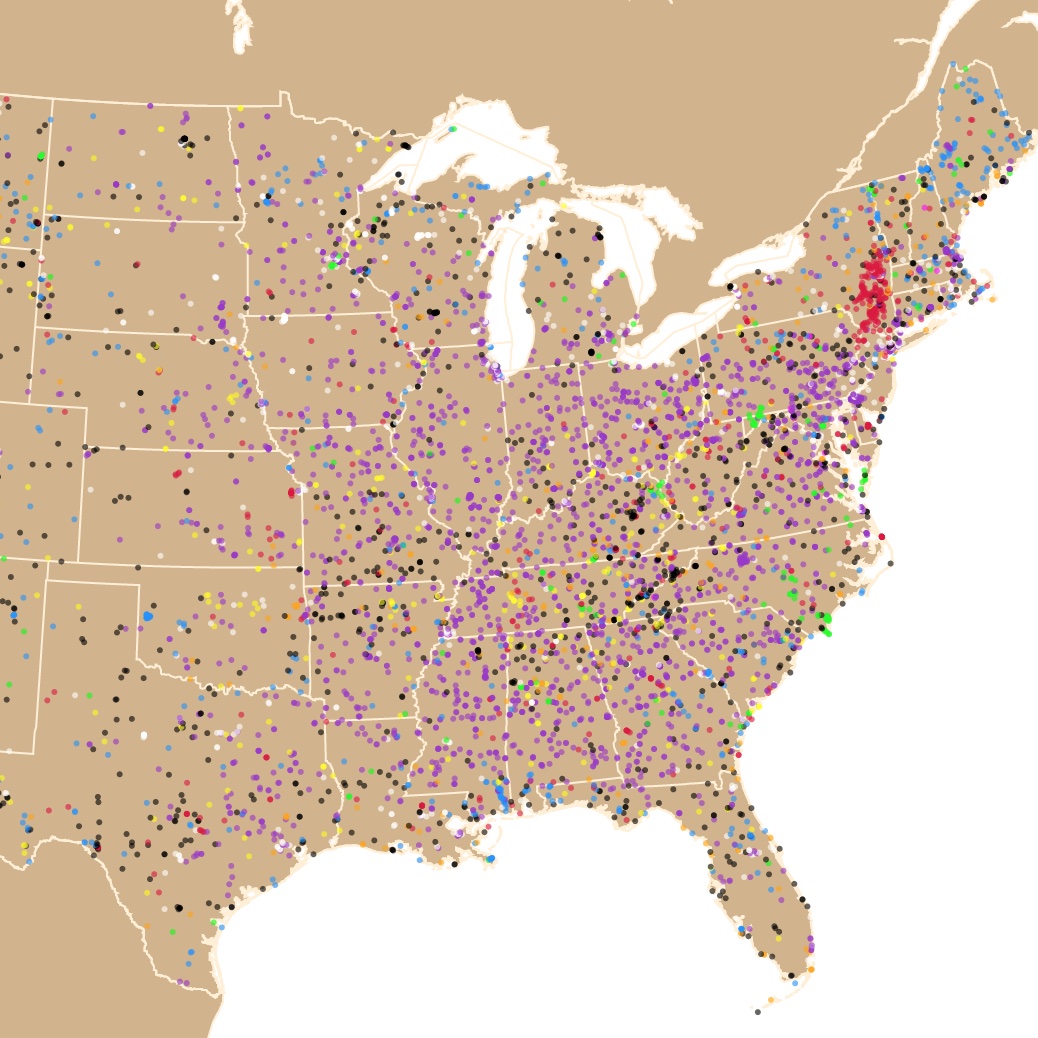 Inspiration for Bayous and Swamps Map

This map was inspired by my experiences as a Graduate Student in the South. I knew about the swamps in the area, but the Bayous were a completely novel term.

Later I lived in Bayou City (Houston). Which highlighted the importance of the term in the South. As other wetlands, they are important features in the landscape that provide numerous beneficial services for people and for fish and wildlife" (EPA).

This iconic feature of the South has been ubiquitous in my American trips and deserved a chart of its own. Furthermore, it needed to be visualized next to swamps to see the pattern of their distribution.

The initial map lacked a lot of locations. Following these suggestions, I used the new data source and was able to include other names associated with wetlands.

With a bit more research, I realized this map had been done before. I found that Paul Fly has a collection of maps with U.S. Toponymy on Flickr.

I also found a good compilation of name maps from Roaring Brook Maps by Gregory diSanto. After checking these maps, I decided to create one that included Bayous, Swamps, Marshes, Bogs, Sloughs, and Coulees. Unlike the previous maps, this one is interactive and allows selecting each wetland, and viewing their names, classification, exact location, and altitude.

If you are interested in toponomy in general, you will definitely like this book on Amazon about geographical names called The Geography of Names: Indigenous to post-foundational (Routledge Studies in Human Geography Book 62).

This is a Bathymetry map. It shows underwater depth. For more information check it out!

The data was downloaded from the Geographic Names Information System (GNIS), maintained by USGS. Data cleaning was done with R Project for Statistical Computing. At first, I used only the data classified as Lakes. Eventually, I realized that Bayous may be classified as streams or Lakes. Therefore you will see that each name might have different classifications. I tried to leave classifications referring to water features.

The code was obtained and altered from Chris Williams’s Block.