Valleys, Canyons, and Depressions: Where are they Found?

This is an interactive map of Valleys and depressions from the continental United States. It shows the locations of features named Valley, Canyon, Hollow, Basin, Gully, Gorge, Pass, Ravine, and Gap. For names and types, hover over the map. Zoom out to see Alaska and Hawaii. Zoom in to see all landforms in detail.

This map locates different forms of depressions found in the United States. The names were chosen as synonyms of the word valley and taken from GNIS.

Some are characteristic landforms of a particular region due to the geography and geology of the area.

Others are probably the result of local populations designating them but are not necessarily describing a particular geographic feature. 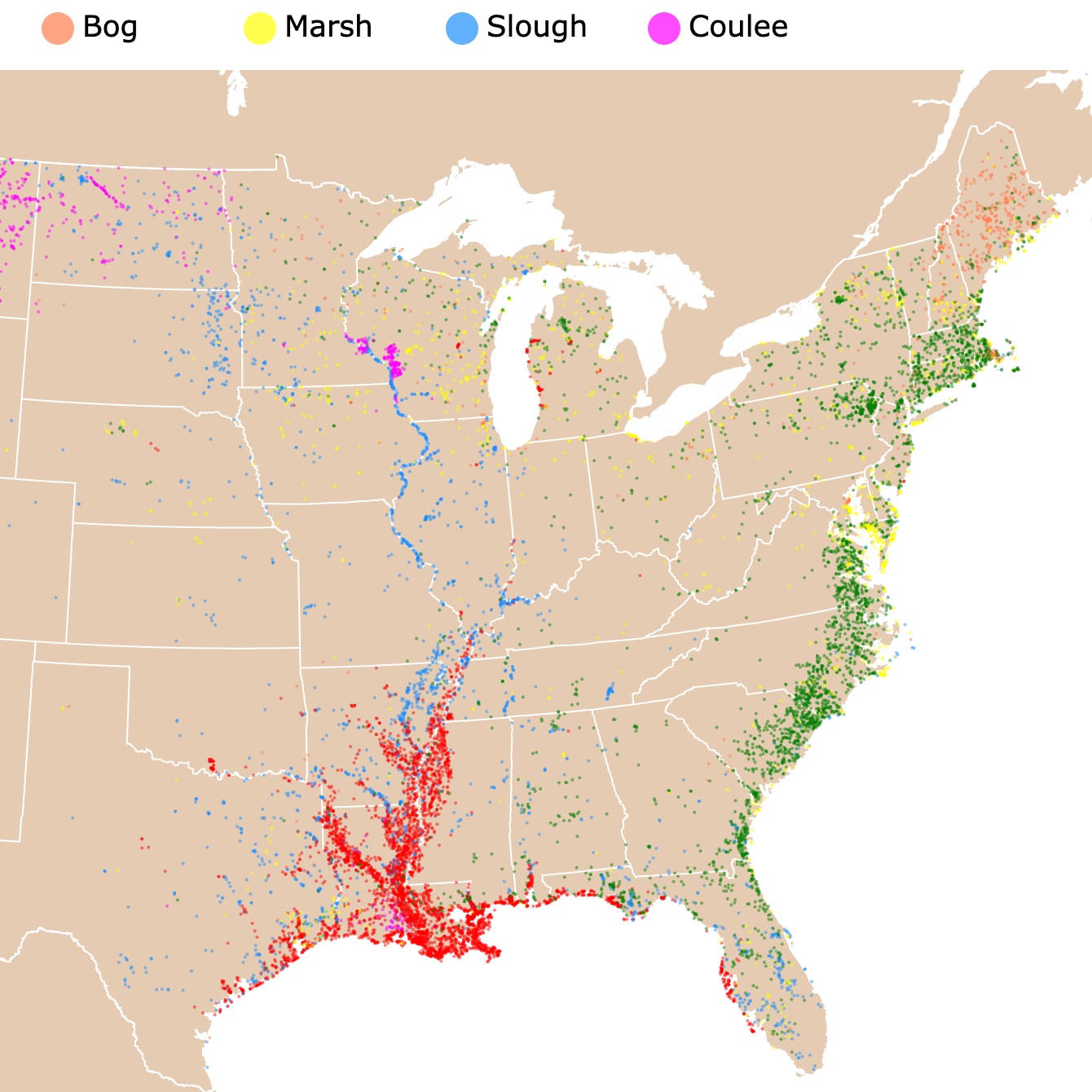 Valleys are the most common landform on Earth. They are found on every continent and even at the bottom of the ocean! Valleys are extended depressions on the surface of the Earth. They are commonly enclosed by hills or mountains and are usually occupied by a river or stream.

Valleys usually have a slope that takes the river flow to another river, a lake, or the ocean.

Valleys are formed thanks to erosion or slow weathering of land by wind and water.

River valleys are created by water eroding rock and soil.

There are three common types of valleys.

V-Shaped valleys are narrow with steep slopes. They would look like a "V" from a cross-section of the valley. They may also be called River Valley.

V-shaped valleys result from the strong flow of streams that cut down the rock over time. The streams flow fast because the slopes are steep..

The river's force picks rocks and stones that grind and carve the river bed. This process is known as downcutting.

River valleys are commonly found at river sources because that is where the bank is steeper.

These valleys are formed in montainous areas, and the streams are young. They are commonly found in high altitudes.

Examples of V-shaped valleys include Iao Valley in Hawaii (to see it on the map, you must zoom out and find it on Maui Island).

Rivers are closely related to valleys and canyons. To learn more, visit this map of U.S. Rivers and streams.

U-shaped valleys have a cross-section that looks like a "U". They may also be called Glacial Valley. 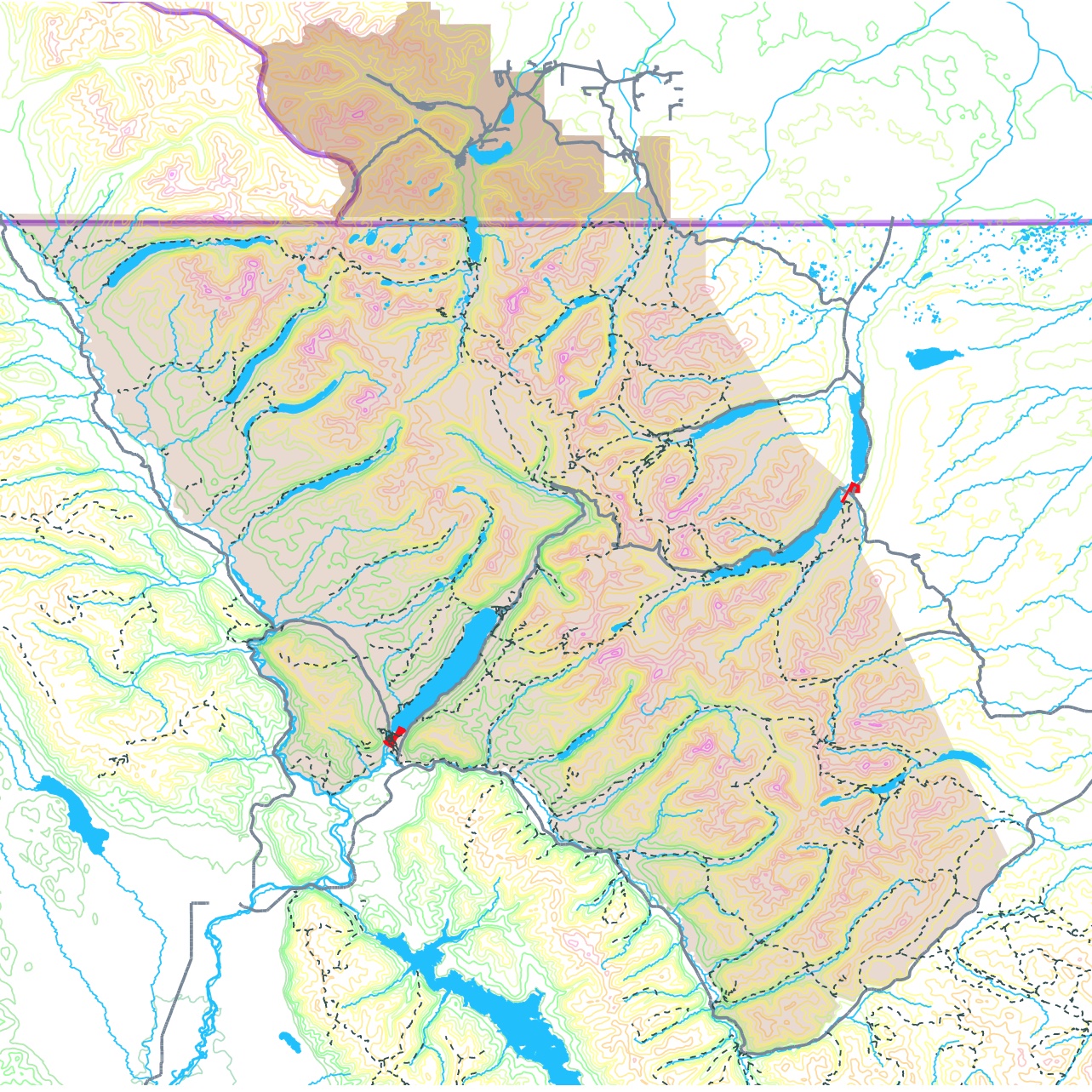 U-shaped valleys are the result of erosion from glaciers. As large glaciers slowly move down mountains, they carve these valleys. These valleys are found in areas of high elevation and high latitude.

These valleys were created during the last glaciation, 115,000 to 11,700 years ago, when glaciers covered a larger portion of the globe.

Because of their large size and weight, glaciers can completely change the topography of a landscape.

Alpine Glaciers form on top of mountains and are responsible for most U-shaped valleys. These glaciers moved down pre-existing V-shaped valleys eroding their sides.

Hanging Valleys are shallow valleys formed over a larger valley. They are called hanging because they hang over other valleys.

Hanging valleys are commonly formed as a result of glaciation.

They can be spotted thanks to their U-shape, and they are found at higher altitudes.

An example of this is Bridalveil Fall in Yosemite National Park.

As the stream ages, it stops eroding the valley walls and begins to deteriorate its own channel. The result is a meandering stream.

With time the stream meanders more of the valley floor and widens it further. When there are flood events, the excess material is deposited on the floodplain, building it up.

Flat-Floored Valleys begin as a V-shape or U-shape valley and slowly transform into a flat valley. They are typically found at lower elevations; ThougtCo.

Features are not only punctual. Some form beautiful contour lines worth exploring

Rift Valleys form where the Earth's crust is spreading or splitting.

These valleys are usually narrow, with steep sides and a flat floor. Many of the rift valleys are found underwater along ocean ridges.

Ocean Ridges and rift valleys are formed when tectonic plates pull apart. An example is the East African Rift Valley.

Canyons are deep narrow valleys with steep walls. They are passages that cut through Earth's surface and have steep cliffs on both sides.

The flow of rivers, weathering, erosion, and tectonic activity result in canyons.

The word canyon comes from the Spanish word "cañon", which means pipe or tube; National Geographic.

Canyons are formed in mountainous areas that are frequently semiarid or arid regions. They occur where river erosion is greater than general weathering (combined action of all processes that cause the rock to disintegrate).

They range in size from a ditch to the Grand Canyon, which is more than 1 mile deep.

Canyons can be found anywhere in the world. They can even be found at the bottom of the sea.

Canyons are formed by the erosion of flowing water and can be widened by landslides. The formation of canyons can take millions of years.

Canyons can also be formed by weathering when water that seeps into cracks freezes in winter. As it freezes, it expands and makes bigger cracks that eventually form canyons.

Limestone is a type of rock that is often found in canyons.

Another way canyons are formed is through tectonic activity. When tectonic uplift occurs, rivers or glaciers cut through it, forming deep canyons.

According to World Atlas, there are three common types of canyons:

This map shows you where Lakes and Ponds are found around the U.S.

An elongated lowland between ranges of mountains or hills. Hollows have a stream or river running along the bottom.

They are also described as small valleys.

Basins are large-scale depressions on land or the seafloor. The sides may dip gently or steeply, but their bottoms are always wider than their depth.

Basins are commonly shaped like bowls, circular, or oval, and lakes are usually at the lower sides of basins. Some basins are filled with water, others are empty.

Some say valleys are very similar to basins. The difference is that valleys have an outlet and basins don't.

Gullies are landforms created by surface runoff that erodes deep into the soil, especially on hillsides.

Gullies are basically wide ditches or valleys in their early stages. They are just a couple of feet deep and wide.

Gullies are formed by erosion and are common in areas lacking vegetation due to grazing or deforestation, World Atlas.

A gorge is a narrow valley with steep walls between mountains or hills.

Gorges are used as synonyms for canyons, but gorges are more vertical, narrower, and smaller than canyons.

Governments flood gorges to create waterways and dams. These are used in turn to generate electricity. Source: National Geographic.

Valleys are determined by summits, hills, and mountains around them. Interested? Visit this map of mountains and Hills in the U.S.

Passes are flat at the summit and have the shape of a saddle.

Mountain passes can be formed by 2 volcanic peaks, glacier activity, rain, or erosion from snowmelt.

Passes may also refer to a channel or deepest part of a body of water that permits passage. This is why they are found on the shores of the Gulf Coast on this map.

An example is Independence Pass, in the Rocky Mountains, Colorado.

A ravine is a canyon or a valley with steep sides but smaller. Ravines are usually larger than gullies.

Ravines may have an active stream throughout the year or just seasonally.

Ravines are formed by the action of streams, and they are generally several hundred feet wide. Source: Worldlandforms.com

A Gap is the lower elevation between two landmasses with higher elevations, like mountains. Gaps are similar to passes but more rugged and hard to cross. Most rugged gaps are called notches.

If you love maps, you will find some of these items found on Amazon, perfect for your home.

Resources for Map of Valleys and Canyons

The data was downloaded from the Geographic Names Information System (GNIS), maintained by USGS. Data cleaning was done with R Project for Statistical Computing. Only the points related to landforms were left. 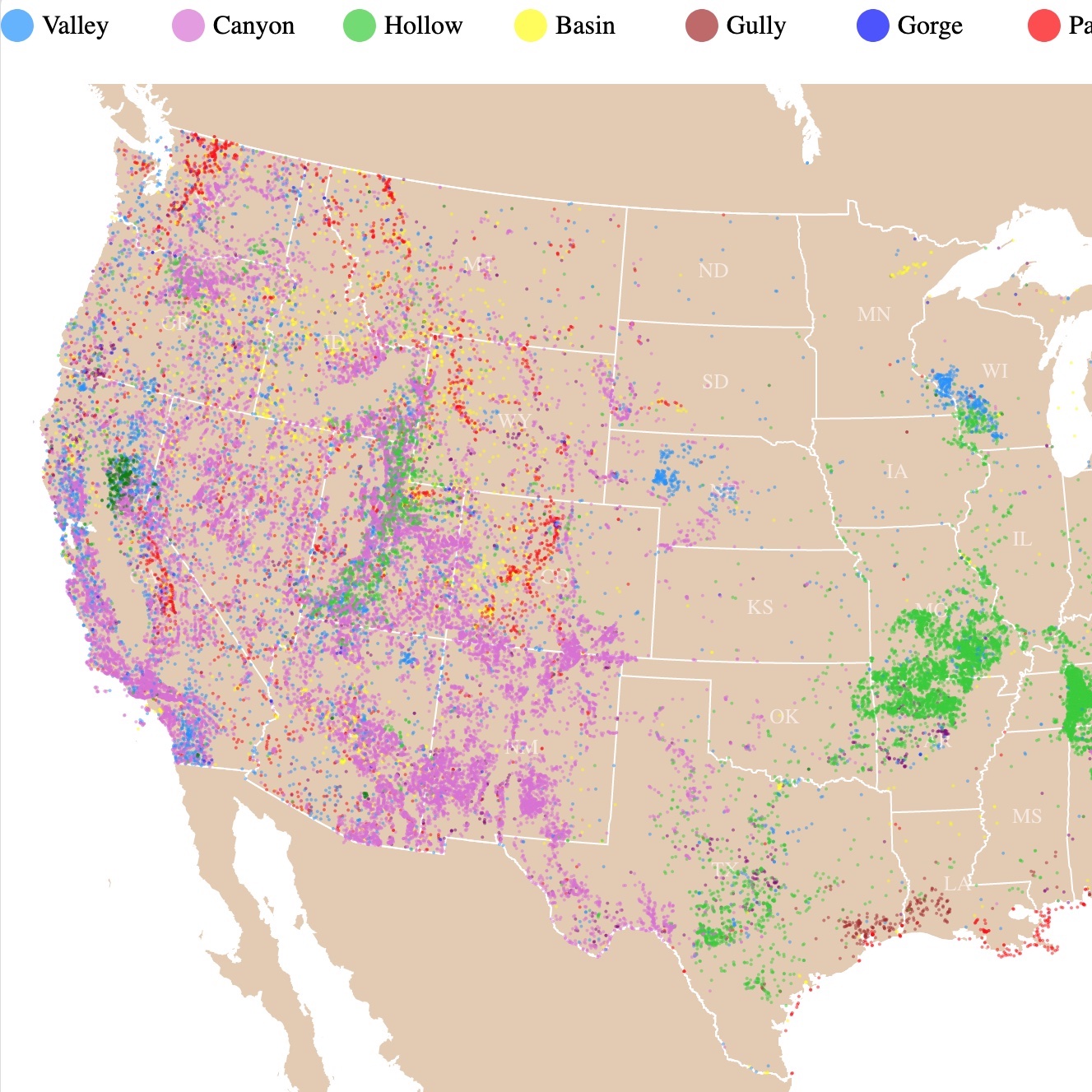